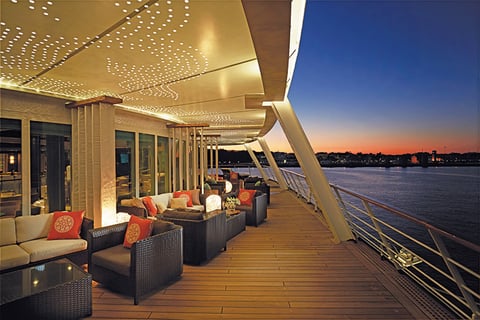 Next year marks the 100th year anniversary of James Joyce’s modernist masterpiece, “Ulysses,” so look for special celebratory programming, exhibits and events around Dublin, Ireland in 2022. The city’s Museum of Literature Ireland, branded MoLI in homage to Molly Bloom, Joyce’s heroine in “Ulysses,” is a great place for bibliophiles to explore Irish literary heritage.

But the city and the country have long celebrated the written word, nowhere more deeply than at Dublin’s Trinity College library, home of the medieval, illuminated Book of Kells. Other literary sites around the Republic of Ireland and Northern Ireland, U.K., honor such writers or poets as Oscar Wilde, William Butler Yeats, Bram Stoker and C.S. Lewis, to name a few. So, here’s a look at luxury cruises that sail to Irish ports, both within the Irish Republic and Northern Ireland in the U.K. Some are immersive with five or more Ireland ports, while others are regional in scope with calls at two or more Irish ports.

After a port call at Portland, England, the 700-passenger Seven Seas Voyager will make six calls within both the Irish Republic and Northern Ireland, at Cork (Cobh), Bantry Bay, Galway, Killybegs, Londonderry and Dublin. Then the ship sets out for Douglas on the Isle of Man and Holyhead in Wales, before the voyage ends in Belfast.

Guests on the Seven Seas Voyager’s “Emerald Island” itinerary will enjoy up to 34 shore excursions included in the cruise fare. Shown above is the ship’s Horizon Lounge deck.

Guests will enjoy up to 34 shore excursions included in the cruise fare. In Dublin, options include the four-hour “River Cruise and Dublin Sights” excursion, which has a stop at the church where Jonathan Swift, Anglo-Irish satirist and author of “Gulliver’s Travels,” preached centuries ago. Or, in Belfast, cruisers could head out independently to explore C.S. Lewis Square, home to seven bronze statues depicting Lewis’ characters from “The Lion, The Witch, and The Wardrobe,” an appealing display of public art.

Post-cruise, Regent Seven Seas offers a three-night “Highlights of the North” stay in Belfast, with touring along the Antrim Coast and a visit to Giant’s Causeway, a UNESCO World Heritage Site. Post-cruise accommodations are at Belfast’s Grand Central Hotel or a similar property.

Another “deep dive” into Ireland’s culture and heritage is Azamara’s 11-day “Ireland Intensive” cruise on the 702-passenger Azamara Pursuit. Embarking guests in Southampton, U.K. on July 27, 2022, the ship will call at nine “Emerald Isle” ports, including Cork (Cobh), Foynes, Galway, Donegal (Killybegs) and Dublin in the Irish Republic, as well as Londonderry, Belfast and Warrenport, Northern Ireland.

The ship will stay late in four ports and give guests plenty of free time to explore with overnights in both Belfast and Dublin. In Dublin, we’d suggest literary-focused travelers can head out to visit MoLI, which not only honors Joyce’s achievements but those of Oscar Wilde, Muriel Spark and other Irish literary luminaries. During the Galway port day, one independent option for literary fans is to stroll through Galway’s Coole Park, the inspiration for “The Wild Swans at Coole,” an evocative poem written by William Butler Yeats in 1916.

An added perk of this voyage is that it’s also designated as a 2022 Irish Links Golf Cruise with PerryGolf, so guests adding this firm’s golf package can play six rounds of golf at world-class courses. For example, golfers can tee up at the Golf Course at Adare Manor in County Limerick. It’s a top course that received a major Tom Fazio renovation in 2018 and will host the 2026 Ryder Cup. Or, in Belfast, travelers will have two full days to play the Dunluce Course at Royal Portrush, routinely ranked among the world’s top 20 golf courses.

Every aspect of the golf program will be fully managed by PerryGolf staff, both onboard and ashore. Golfers’ clubs will be waiting at each venue, tee times and pairings will be arranged and posted in advance and a box lunch and open bar (after each round) will be provided. Caddie fees will be included, while gratuities are additional. 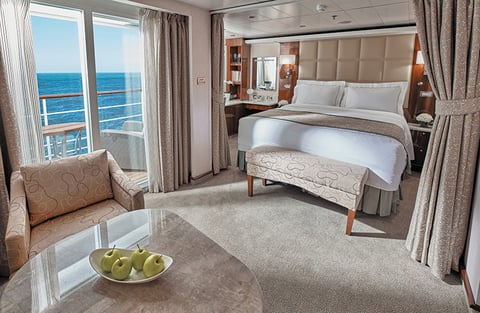 The Master Suite on the Seven Seas Voyager

Next are the “Emerald Isle” port calls — Cobh (Cork), Dun Laoghaire (Dublin) and Belfast. One Seabourn excursion includes a visit to see the Book of Kells, but we’d suggest choosing the “Dublin’s Hidden Treasures” excursion. Taking a walking tour to lesser-known areas, tour goers will see George’s Street Arcade, Powerscourt Townhouse Centre and the Iveagh Gardens. This walking tour also has particular appeal during the 2022 “Ulysses” centenary year, as it includes an inside visit to Dublin’s Museum of Literature Ireland (MoLi), where guests will head out on a self-guided tour of the galleries and exhibits.

Following the Dublin call, Seabourn Ovation then sails for additional ports in Scotland and England, U.K., before the journey ends in Dover. 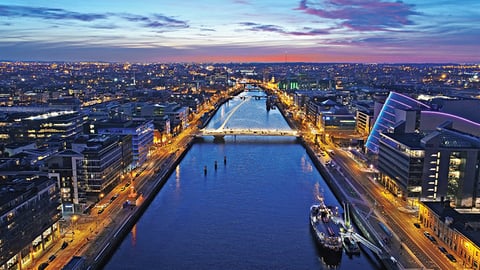 In Dublin, literary-focused travelers can head out to visit the Museum of Literature Ireland, MoLI. // Photo: Getty Images

For an ultra-luxury voyage that combines the British Isles, Iceland and Ireland, one good option is Silversea Cruises’ 12-day “Northern Europe and British Isles” cruise on the new 596-passenger Silver Moon, a sister to Silver Muse. The ship, which will offer the line’s new “S.A.L.T. (Sea and Land Taste) culinary program, will sail from Southampton, U.K. to Reykjavik, Iceland on May 18, 2022.

After port calls in Falmouth and Liverpool, England, as well as Fishguard, Wales, Silver Moon will arrive in Ireland. Guests will spend a full day in Belfast, Northern Ireland. One included Silversea shore trip that’s likely to be popular with maritime buffs is “Belfast Treasures and Titanic,” which will take guests on a narrated motorcoach tour to view Belfast city sites and then to Titanic Belfast.

During this Silversea excursion, guests will enjoy a self-guided tour of the Titanic Museum’s nine interactive galleries, which tells the story of Titanic from conception to launch in Belfast. Sadly, on its 1912 maiden voyage, the liner struck a North Atlantic iceberg and sank with a great loss of life.

Silver Moon also will call at Dublin (Dun Loaghaire), where guests can take one of the line’s included shore tours or head out independently to MoLi, which for 2022 will debut an exhibition on Joyce’s relationship with his wife, Nora Barnacle, and his family. During the rest of the cruise, Silver Moon will call at Oban, Scotland and Stornoway (Isle of Lewis), before arriving in Iceland at Seydisfjordur, Djupivogur, Heimaey (Westman Islands) and Reykjavik.

For luxury travelers seeking a 2023 Ireland vacation, Viking’s 15-day “British Isles Explorer” itinerary is operated between Bergen, Norway and London (Greenwich) on seven different dates in April, May and June 2023. This itinerary includes port calls within Scotland, England, the Shetland Islands, Iceland, the Orkney Islands, plus Dublin and Belfast. 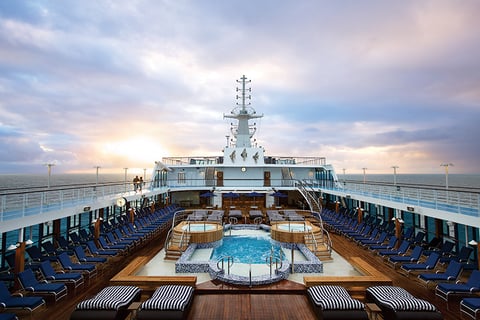 Oceania Cruises’ “British Isles Sojourn” is a 22-day voyage from Southampton (London) to Dublin on the 684-passenger Sirena, here.

Then, tour goers will pop into a typical Irish pub for a cool glass of Guinness. Next, they’ll head to Trinity College, Ireland’s oldest university, to see the Book of Kells, and then enjoy free time on Nassau Street for shopping.

Crystal Expedition Cruises’ 14-day “Exploration: Springtime in the British Isles,” a northern Europe cruise from London (Greenwich) to Edinburgh (Leith) on the new 200-passenger Crystal Endeavor, departs May 25, 2022. Among the draws? The ultra-luxury line cites opportunities to explore Dublin’s literary heritage as well as Portrush’s proximity to Giant’s Causeway.

In addition, the new expedition ship will call at many remote ports in the British Isles, including the scenic Isles of Scilly, the isolated St. Kilda archipelago, the Scottish Highlands and the windswept Shetlands. Guests also spend an overnight in Edinburgh, Scotland.

Another option is Oceania Cruises’ 22-day “British Isles Sojourn,” a voyage from Southampton (London) to Dublin on the 684-passenger Sirena, departing June 3, 2022. This itinerary will cover multiple ports in France, Spain, the U.K. and Ireland. Calls will include the French ports of Le Havre (for Paris), Saint-Malo, Brest, La Rochelle and Bordeaux (overnight), as well as the Spanish ports of Bilbao and San Sebastian, Spain, plus cruising through the Bay of Biscay & English Channel. 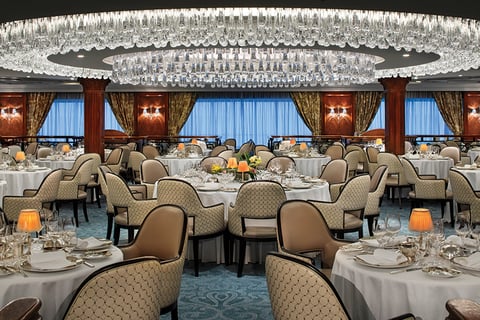 Shown below is the Grand Dining Room on Sirena. // Photo: Getty Images

Then the ship will call at Southampton (for London), Newcastle, U.K., plus multiple Scotland destinations, before calling in Londonderry, Northern Ireland. Then it’s on to Liverpool, England and Holyhead, Wales, before guests disembark in Dublin.

Small-ship Ponant will offer a nine-day “Landscapes and Islands of the North Atlantic” itinerary from Bordeaux, France to Dublin on May 7, 2022. The luxurious, 264-passenger L’Austral will explore the French, English and Irish coasts, often calling in small fishing ports. 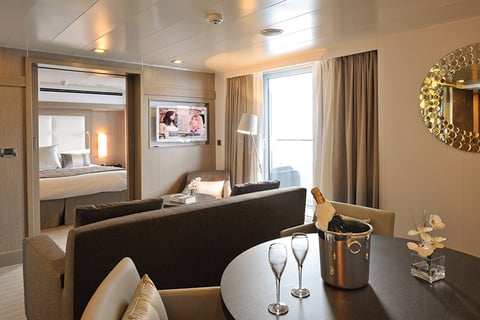 Ponant will offer a nine-day “Landscapes and Islands of the North Atlantic” itinerary from Bordeaux, France to Dublin on the 264-passenger L’Austral, here and below.

In France, guests will go ashore at the isle of Belle-Île-en-Mer. Impressionist painter Claude Monet lived here for a time in the village of Kervilahouen. We’d suggest active cruisers climb the 247 steps of the Grand Phare lighthouse for breathtaking ocean views. Other France calls will include Roscoff and Saint-Malo.

Then L’Austral will head for Guernsey, the Channel Islands, before calling along the English coast in Dartmouth and the Isles of Scilly. In Ireland, the ship will stop at Kinsale, a gorgeous Irish village that’s home to colorful houses, art galleries and theaters as well as a 17th-century fort.

Ponant’ Kinsale excursions explore nearby Cork and give guests an opportunity to also visit either Jameson Distillery or Blarney Castle. Once the ship reaches Dublin on disembarkation day, for those with late flights, the line offers an excursion, “Tradition and Culture of Ireland” so guests see a bit of Dublin, including the Book of Kells at Trinity College.

Small-ship Windstar Cruises also will sail to Dublin during its 18-day “Star Collector: Northwest Europe in Sips and Bites” itinerary. The 312-passenger Star Pride, recently renovated and “stretched” with new spaces and suites, will depart from Lisbon, Portugal to Edinburgh, Scotland on June 27, 2022. 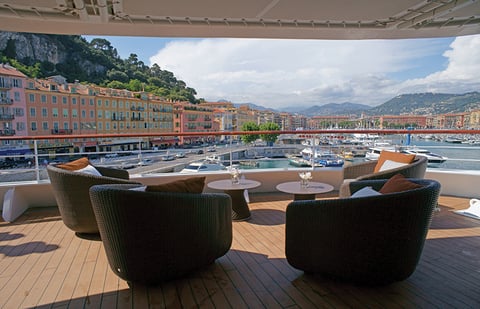 Guests will journey to Giant’s Causeway, a UNESCO World Heritage Site, where they explore the interpretive visitor’s center, detailing explanations of how the causeway’s 40,000 basalt stones were formed. The “Causeway Coaster” minibus will take cruisers to the causeway itself.  Then tour goers will reboard the motorcoach and head farther along the North Antrim Coast.

They’ll set out on foot along a half-mile winding, bumpy pathway and navigate steps leading to the Carrick-a-Rede Rope Bridge. The bridge is definitely not for the faint of heart or those with a fear of heights. It sways 98 feet above the coastline’s steep cliffs and crashing waves.

When it comes to the “Emerald Isle,” certainly a host of heritage, cultural and eco-draws entice luxury travelers, but this coming year, the centenary of James Joyce’s “Ulysses” provides added impetus to visit — in particular for literary buffs.

Americans Can Visit Ireland Without Quarantine From July 19