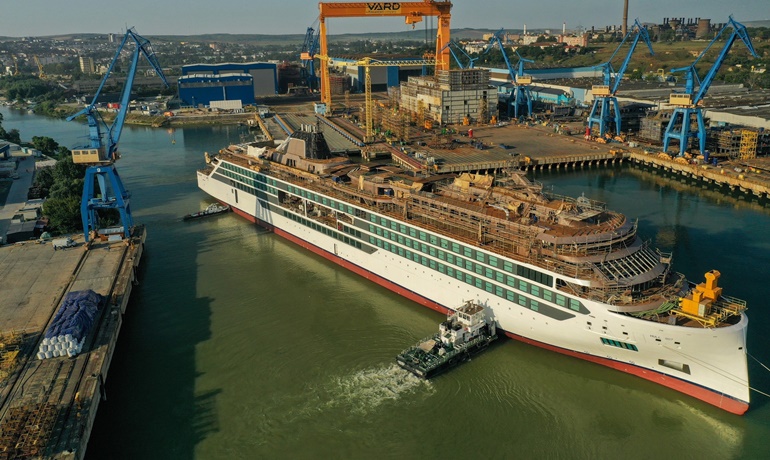 Viking‘s second expedition ship—the 378-guest Viking Polaris—was “floated out,” marking the first time that the new ship touched water. Scheduled to debut in summer 2022, Viking Polaris will spend its inaugural season sailing voyages to the Arctic and Antarctica; its identical sister ship, Viking Octantis, was floated out last December and is set to debut in early 2022 for journeys to Antarctica and North America’s Great Lakes.

The float out ceremony of Viking Polaris took place on July 27. The vessel was then moved to a nearby outfitting dock for further construction and interior build-out. After final outfitting, Viking Polaris will be delivered at Fincantieri’s VARD shipyard in Søviknes, Norway.

Explorers Liv Arnesen and Ann Bancroft will be the ceremonial godmothers to Viking Octantis and Viking Polaris, respectively. Arnesen, a native Norwegian, became the first woman in the world to ski solo and unsupported to the South Pole in 1994. Bancroft is the first woman to successfully ski to both poles. Arnesen and Bancroft also became the first women to ski across Antarctica in 2001. Together, they co-founded Bancroft Arnesen Explore / Access Water, an initiative that aims to engage and empower more than 60 million minds to create a sustainable tomorrow.

The new Polar Class 6 Viking Octantis and Viking Polaris will accommodate 378 guests in 189 staterooms. Designed by the same teams that designed Viking’s ocean ships, the ships are built for expeditions—small enough to navigate remote polar regions and the St. Lawrence River, while large enough to provide superior handling and stability in rough seas. The ships will have public spaces that are familiar to Viking’s ocean cruise guests but that have been “reimagined” for expeditions, as well as new public spaces created specifically for expeditions.

Among other highlights on the ship, there is The Hangar, which permits the launch of small excursion craft through the ship’s multiple shell doors; The Laboratory, where an onboard team of Viking resident scientists will work on a variety of studies; and The Aula, a panoramic auditorium at the stern.

For a robust program of complimentary experiences, Viking Octantis and Viking Polaris will include a fleet of zodiacs designed for professional use in the harshest of environments; a fleet of two-seater kayaks; and two 12-seater convertible RIBs (rigid inflatable boats). Each ship will also have two six-guest submarines with revolving seats and 270-degree spherical windows for an “incomparable” undersea experience.

All staterooms onboard Viking Octantis and Viking Polaris will have a Nordic Balcony—a sunroom that converts into an al fresco viewing platform. Among the suite options, Nordic Junior Suites offer 322 square feet of space, while the Explorer Suites are 580 square feet. Additionally, each ship has one Owner’s Suite, which at 1,223 square feet, is twice the size of the Explorer Suites. It offers two separate rooms—a living room with six-seat dining table and a bedroom—as well as a 792-square-foot private garden with a traditional Norwegian badestamp (wood-sided hot tub) and outdoor dining table.

Other amenities on the ship include the Aquavit Terrace & Pools; the Nordic Spa & Fitness Center and Explorers’ Lounge.

For dining, Viking’s expedition ships will offer an array of options that build on the venues from Viking’s ocean ships. The Restaurant will offer fine dining with regional cuisine and classics; the World Café will be a new “market” concept that offers live cooking, an open kitchen, bakery, grill and seafood and sushi choices, as well as a range of international flavors; Mamsen’s serves Scandinavian-inspired fare; Manfredi’s offers Italian cuisine; and 24-hour room service will be complimentary for all guests.