Where to Stay in Los Angeles: Best Suburbs & Neighborhoods 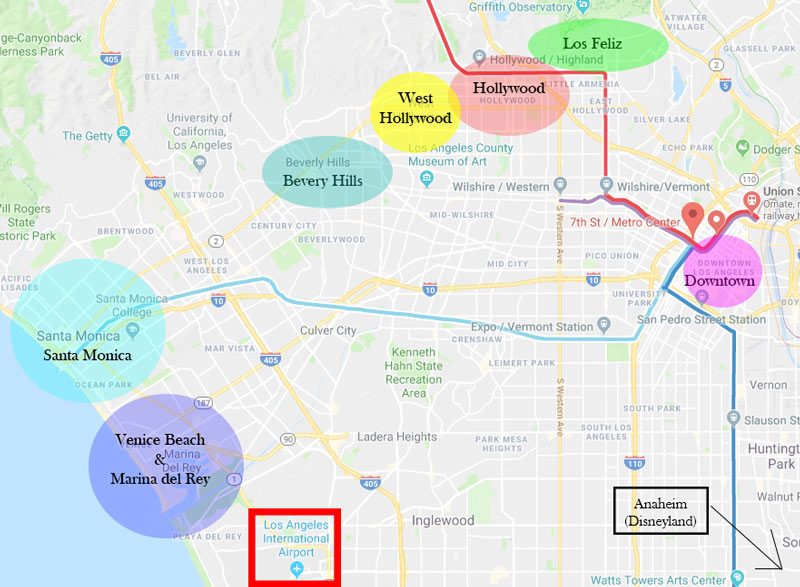 If visiting Los Angeles is in your plans, your next important decision will be choosing where to stay in this huge metropolis. But it’s hard to know where to begin when you visit a city like Los Angeles for the first time. Unlike other big metropolises around the world, Los Angeles’ attractions are spread all over, which makes choosing the best places to stay fairly difficult.

There are some facts about Los Angeles that you probably already know about. But if you have never been here before, you can’t appreciate how massive and spread out L.A. really is. This fact alone will ultimately determine your decision about where to stay in Los Angeles.

As a 30-year resident of L.A. I know how difficult it is to visit this city, so I’m here to help. If you are looking for a place to stay in Los Angeles, you must book somewhere with easy access to the sights and entertainment.

There are quite a few nice neighborhoods in Los Angeles that you can use as a base when visiting the city. So in this post I’ll give you an overview the best areas, as well as the ones that you should avoid. The latter ones may be popular places to visit during the day, but not the best areas to be around after nightfall.

Downtown Los Angeles (Best Place to Stay Without a Car)

This is one the best places to stay if you only have one day in L.A. and would like to take a self guided tour of Downtown Los Angeles.

You could and explore some of the attractions of the city, or do some shopping, so you won’t be needing a car. Downtown area is also home to some of the best bars and most upscale restaurants in L.A., as well as the famous Grand Central Market.

In terms of entertainment, there are plenty of opportunities here. From the world renowned Disney Concert Hall, and the Staples Center, to the Historic Theater District , and museums like The Broad, The Museum of Contemporary Art (MOCA), you have more than enough!

Downtown area is relatively equidistant from the coast, Disneyland, and other inland points of interest. Besides, it has good public transportation to many of Los Angeles’ attractions.

There is a wide variety of accommodations to choose from in the Downtown area, from budget to midrange and luxury hotels. Some of the best and most centrally located are The Westin Bonaventure, citizenM, or Hotel Figueroa.

West Hollywood is one of the oldest and most fashionable neighborhoods in Los Angeles, with a colorful and entertaining past. Back in the 60s and 70s, West Hollywood became a major gathering place for the unconventional culture, with hippies, musicians and artists flooding the streets.

At present, West Hollywood is the hottest destination for the entertainment industry with its boutique hotels, celebrity-owned restaurants, and vibrant nightlife. From elite, trendy clubs to low-key casual bars, from gay clubs, to old school rock’n roll hangouts, and hotels with pool parties, West Hollywood has something for everyone.

People from all over the globe visit it for its iconic Sunset Strip and its historical connection to music, entertainment and fashion. Young actors tend to live out here, so this is the most likely place to see celebrities out on the street.

In terms of location, WeHo is very conveniently located within 20 minutes from the Valley, Downtown, Silver Lake, and Santa Monica (when there is no traffic).

From residential suites with rooftop pools and private balconies to apartments or large rooms with balconies, boutique hotels, or pet-friendly hotels, you can find a wide range of accommodations in West Hollywood.

Some of the best hotels include: Le Parc Suite Hotel, Sunset Marquis, and Mondrian Los Angeles.

Los Feliz is a relaxed hillside enclave next to Glendale and encompassing part of the Santa Monica Mountains. Bordered by Hollywood to the west, Silver Lake to the south and Atwater village to the east, this hillside neighborhood is home to some of the most outstanding architecture in Los Angeles County.

Here is where you’ll find the Vista Theatre – a 1923 movie palace – and a pair of exemplary Frank Lloyd Wright homes.

Los Feliz is the birthplace Mickey Mouse, one of Hollywood’s most iconic celebrities. Walt Disney was living in his uncle’s garage, on Los Feliz, when he first drew his famous character. The neighborhood is also famous for being next-door to Griffith Park, beloved for its hiking, the Greek Theatre and the famous Griffith Observatory.

Los Feliz has a cozy vibe. There are no tall, sun-blocking buildings here. Instead you’ll find charming homes, tree-lined streets dotted with restaurants, coffee shops, boutiques, and vintage stores. The neighborhood is pedestrian friendly, it has top-notch cuisine, plenty of entertainment, and is a hiker’s paradise.

Los Feliz is easily accessible via major thoroughfare streets and Interstate 5 to the east. So getting in and out of Los Feliz is easy, with quick access to Downtown Los Angeles, the San Fernando Valley and San Gabriel Valley and, with a little extra drive time, to the iconic L.A. beaches.

There are plenty of old-school hotels and quite a few budget accommodations in Los Feliz. So if you are in a big group and you don’t want to spend a lot, you may find very decent prices here.

There are also fully furnished apartments for rent through VRBO, or boutique and luxury hotels.

With is central location, beautiful parks, fine dining, upscale shops and acclaimed hotels, who wouldn’t want to stay in Beverly Hills? Flanked on the west by Westwood, home to the University of California Los Angeles (UCLA), and on the east by West Hollywood, the glitzy Beverly Hills attracts tourists like no other place.

Looking at where Beverly Hills is today, it’s hard to imagine that only 100 years ago these hills were home to a Mexican ranch where lima beans were grown.

The elegant Beverly Hills is home to many rich and famous people who love shopping on Rodeo Drive. So besides being a great base to explore Los Angeles, Beverly Hills is also one of the world’s most fashionable places to shop.

Beverly Hills is renowned as a place of luxury, so staying here will ensure a hotel that matches the grandeur and glamour of the nearby mansions.

Aside from the iconic Beverly Hills Hotel that remains popular decade after decade, there are some other posh establishments worth mentioning in this part of town. Like the recently renovated Maybourne Beverly Hills, or Viceroy L’Ermitage.

But not every Beverly Hills hotel must be outrageously expensive. There are some affordable hotels as well, like the Beverly Hilton, Sixty Beverly Hills, or Sonder The Crescent.

Where to Stay Around Los Angeles: 5 Best Suburbs for Families

Santa Monica is one of the most iconic parts of Los Angeles, great for shopping and outdoor activities. It has an amazing coastline, with plenty of wide beaches, parks, bars, and restaurants. The town is very safe and it has great public transportation.

If you are visiting Los Angeles as a family and just like to get out and do different things, this is the right place to stay.

This beautiful town is walkable and bikeable and it’s only half an hour away from Downtown L.A. It’s also close to many attraction, like the Santa Monica Pier, Venice Beach, Getty Museum, Griffith Observatory, or the Sunset Strip. There are also great trails in Pacific Palisades which is a 10 minute drive away.

California is known for being one of the most expensive places in the United States. But fortunately, there are a few places that are still affordable, and Long Beach is one of them.

Long Beach is a large city that feels like a small town, with very distinctive neighborhoods. There are a lot of great parks and green spaces, lots of shopping areas and great restaurants.

Long Beach is conveniently located, equally close to the beautiful beaches of Orange County and the City of Los Angeles. Public transportation is easily accessible and inexpensive. There are a lot of popular activities such as festivals, concerts, the Queen Mary, or the Aquarium. Of course, there are great bars and restaurants, as well as fun beaches.

Hidden in the foothills of the San Gabriel Mountains, just a few miles away from Downtown L.A., lies one of nicest towns in California: Pasadena.

Home to the famous Rose Bowl Stadium, Norton Simon Museum, and the Huntington Gardens, Old Town Pasadena is famous for its Victorian and Art Deco buildings, as well as shopping and dining district.

This is a great suburb to stay if you are looking for a quieter place away from the hustle and bustle of Los Angeles. But rest assured that you won’t get bored here. There are theaters, concert halls, museums, botanical gardens, parks, and many other attractions in Pasadena. There are a bunch of restaurants, night clubs and such, but nothing too crazy.

Pasadena is a very calm and quiet city and it is most definitely not like your typical Los Angeles County city. It’s clean, well organized and it’s full of students (home to Cal Tech, Pasadena City College, Art Center College of Design, etc).

Where NOT to Stay in Los Angeles

Most of L.A. is just as safe as any other big city in the world. There are of course some dangerous neighborhoods. But as a tourist, you won’t be going there anyway, so there is no point in mentioning them here. However, there are a few places in L.A. that are OK to visit during the day time, but are definitely not safe enough to stay or to walk around after dark.

Little Tokyo is a historic Japanese district right in the middle of downtown Los Angeles. Back in 1941 there were approximately 30,000 American Japanese living in Little Tokyo. But in 1942, as a result of the Pearl Harbor attacks by Japan, the Japanese population was incarcerated in isolated camps. After WWII they were all released, but unfortunately not many of them returned to this area.

If you drive through Little Tokyo during the day, you’d think there is no way this is the second most violent neighborhood in Los Angeles. But the numbers don’t lie. People are getting beat up here all the time and the overall crime rate in Little Tokyo is 668% higher than the national average!

Chinatown had a somewhat similar faith to that of Little Tokyo. The original Chinatown was demolished to make room for the Union Station, which was the transportation center back in the day. I’ve been to Chinatown more times that I can remember and never really saw any crime. However, I always made sure I was out of there by nightfall.

Starting 1910, Chinatown starting to decline – symptoms of a corrupt Los Angeles. All the gambling houses, opium dens and gang warfare in the area made lots of people leave the neighborhood. The area slowly shrank and now is kind of rundown area with small Chinese business. The crime rate in Chinatown Los Angeles is 679% higher than the national average.

Venice Beach used to be one of the most iconic and well-known places in Los Angeles. A lot of street performers, funky stores, nice cafés and chic boutiques. Pre-pandemic, the beach was definitely a worthwhile and unique place to visit.

But lately, it doesn’t have the same vibe anymore. The broadwalk in Venice Beach is now a “dangerous homeless encampment”, according to Eyewitness News. “Fed-up residents are calling for action amid a series of crimes and drug use in the area. On the sand, mixed with seaweed, you’ll find syringes, feces, broken glass and other trash. And the ocean has become the biggest outdoor toilet in the city.”

Sadly, today Venice Beach is no longer a safe place to stay and unless the city of Los Angeles decides to take action, it’s even too dangerous to visit!